The Pedal Power Association is excited to announce that TOKEN Cycling has come onboard as the new title sponsor of the 2018 Double90 team challenge, which will take place on Saturday 14 April 2018 in the eastern Free State.

The event will be known as the TOKEN Double90. 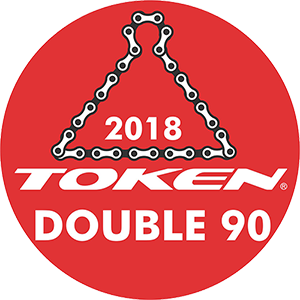 In 2016 the Pedal Power Association took the challenge of a 12-man team time trial over nearly 200 km to the foothills of the Maluti Mountains.  Over the past two years, the Maluti Double90 has left cyclists breathless – both due to the magnificent scenery in the Golden Gate Reserve, and the tough but rewarding route.

In 2017 a new course record was set when the winning team in the open category, Team RoadCover Cycling, sprinted to the finish line at the President Square, Clarens in 4:38:31.

“Without the support of our customers, our fellow cyclists, TOKEN Cycling SA wouldn’t be where it is today,” said TOKEN CEO, Warren Foyn. “This is one way we feel we can show our appreciation for that support. Yes, it creates exposure for our brand, but it’s about a lot more than just that

Partnering with the Pedal Power Association and coming onboard as the title sponsor of the Double90 Team Challenge represents a great opportunity for us to be able to put something back into cycling for the benefit of the cycling community, our biggest stakeholder,” Foyn added. “And not only do we look forward to an extended association with this race, but with potentially more to follow. Hopefully TOKEN’s sponsorship contributions will help to ensure that entry fees continue to be kept to a minimum, thereby ensuring that this and other races remain accessible for as many cycling enthusiasts as possible, while still delivering a top-class rider experience.”

“The sponsorship will allow PPA to improve the rider experience in the Token Double90, as well as to ‘give back’ to the local community through our Bike4all Project,” said Robert Vogel, Pedal Power Association CEO. “We really look forward to a great event in 2018.”

Entries for the Token Double90 will open in the third quarter of 2017.

EVENT DETAILS AT A GLANCE