After an intense ride to make up 90 seconds in the first 100 km of the race, Team Road Cover won the inaugural PPA Maluti Double90 Challenge on Saturday 7 May 2016 in a time of 4:50:48, averaging just over 37 km/h over the challenging 180 km eastern Free State course. Starting in the last position as the top-seeded team, they crossed the finish line seconds ahead of Team Bluff Meat Supply (4:53:48) to beat them by just under 3 minutes. Third across the finish line was Team Van Heerden Pharmacy/Apteek (5:01:58). 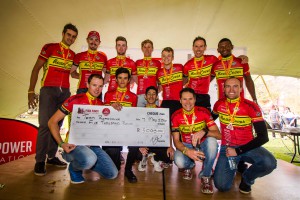 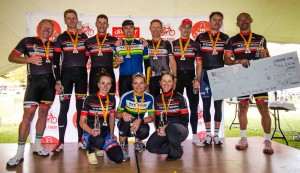 Race day dawned cold and crisp with a start line temperature of just under 10 degrees. “The wind on the latter part of the course was a challenge,” said Team Road Cover’s Bradley Potgieter. “There are a few ways to ride this race, and we decided to go all-out from the start. It was maybe a bit intense for some, but we had a good working order and kept a high speed,” Potgieter added. “We could have been faster, but we are happy with our result. We’ll definitely be back next year.”

Team Road Cover, who had combined riders from the Road Cover Cycling Team with the RCCC Hollard u/23 team, pulled into the Supporter Zone at Kestell (104 km) just 30 seconds off Team Bluff Meat Supply who had started 2 minutes ahead of them. Road Cover spent less than a minute to refuel at the Supporter Zone and sped off with seven riders, having dropped five of their team members by now. The two leading teams rode within sight of each other in the approach to the hilly Golden Gate section. With cramps threatening, neither team pushed the pace up the hills, with Bradley Potgieter and Kent Main putting their heads down to pull Team Road Cover into first place, overtaking Team Bluff Meat Supply close to Clarens.

“Cyclists participated in teams of up to 12 riders,” explained PPA Chairman Steve Hayward. “While some teams did line up with fewer than 6 riders, you needed a minimum of 6 riders to be counted as an official team. Teams had to stay together as long as possible, as the time of the sixth rider across the finish line counted as the team’s official time.”

While most teams started 1 minute apart, the top teams started 2 minutes apart at the back of the field. To qualify as a mixed team, the team needed three members of the opposite gender in the top 6 across the finish line.

The first team challenge was first held 23 years ago when the Pedal Power Association organised the first ‘Double Century’ in the Western Cape. “Over the years, the event has only ever been held in the Cape. However, when the Association opened an office in Bloemfontein in 2015, we decided this was the ideal time to take the team challenge concept to the Free State,” Hayward said.

A number of route and venue options were investigated, with the final route taking participants from Clarens to Bethlehem and out towards Warden before pedalling through Kestell and the Golden Gate Reserve.

“Once teams entered the scenic Golden Gate Reserve, they had only 40 km to go – but this section  included most of the hills on the course,” explained Hayward. “At the 150 km mark, we introduced the Enervit Hot Spot, a 2.6 km climbing section which included the notorious ‘Mineshaft’ with gradients spilling over at 16%.” 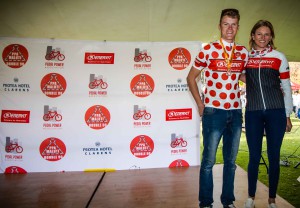 The winner of the Enervit King of Maluti (KOM) was Jaco van Dyk of Team Almec Carpet Worx, who blitzed off the climb in 05:29. Desray Sebregts of Team Token Cycling was crowned as the Enervit Queen of Maluti (QOM), having completed the steep climb in 07:37. 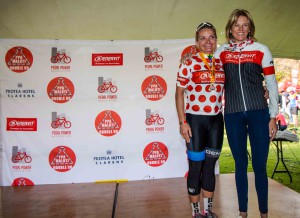 At the finish, several cyclists said that they had underestimated the 180 km route, or overestimated their own fitness, with the wind on the day adding to the challenge.

“That was just terrible!” puffed one cyclist as he crossed the finish line. “Where do I sign up for next year?”

Is it as tough as the Coronation Double Century? The field was a bit divided on this. “The route may be 20 km shorter, but the altitude plays a big role. And the hills are definitely tougher. But without the wind, it could be very similar,” seemed to be the general consensus.

“From an organisational point of view, we are thrilled with the inaugural PPA Maluti Double90 and how the event unfolded on the day,” said Race Director Karin Pohl. “Everything ran like clockwork and we have received rave reviews from participants. It was challenging. It was scenic. And the last 40 km through the Golden Gate reserve was a killer. It’s the perfect combination.”

Top results are as follows: